Towards a unified source-propagation model of cosmic rays 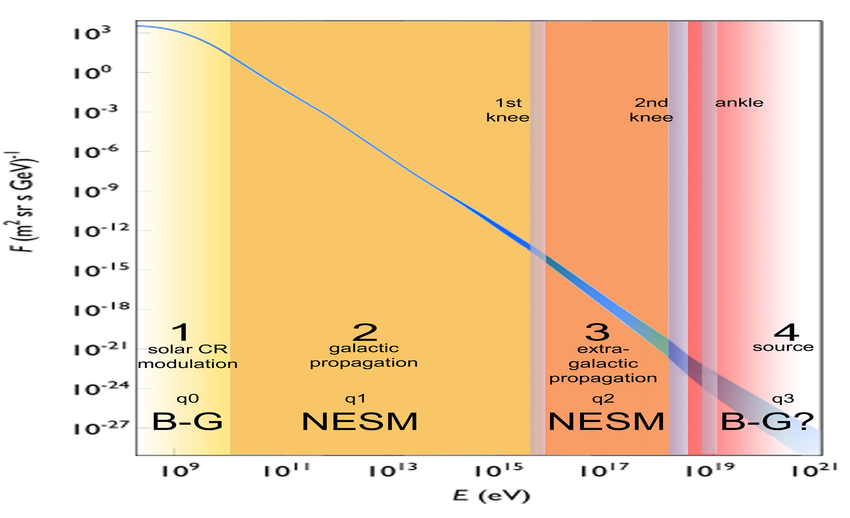 Towards a unified source-propagation model of cosmic rays

It is well known that the cosmic ray energy spectrum is multifractal with the analysis of cosmic ray fluxes as a function of energy revealing a first “knee” slightly below 1016 eV, a second knee slightly below 1018 eV and an “ankle” close to 1019 eV. The behaviour of the highest energy cosmic rays around and above the ankle is still a mystery and precludes the development of a unified source-propagation model of cosmic rays from their source origin to Earth. A variety of acceleration and propagation mechanisms have been proposed to explain different parts of the spectrum the most famous of course being Fermi acceleration in magnetised turbulent plasmas (Fermi 1949). Many others have been proposd for energies at and below the first knee (Peters & Cimento (1961); Lagage & Cesarsky (1983); Drury et al. (1984); Wdowczyk & Wolfendale (1984); Ptuskin et al. (1993); Dova et al. (0000); Horandel et al. (2002); Axford (1991)) as well as at higher energies between the first knee and the ankle (Nagano & Watson (2000); Bhattacharjee & Sigl (2000); Malkov & Drury (2001)). The recent fit of most of the cosmic ray spectrum up to the ankle using non-extensive statistical mechanics (NESM) (Tsallis et al. (2003)) provides what may be the strongest evidence for a source-propagation system deviating significantly from Boltmann statistics. As Tsallis has shown (Tsallis et al. (2003)), the knees appear as crossovers between two fractal-like thermal regimes. In this work, we have developed a generalisation of the second order NESM model (Tsallis et al. (2003)) to higher orders and we have fit the complete spectrum including the ankle with third order NESM. We find that, towards the GDZ limit, a new mechanism comes into play. Surprisingly it also presents as a modulation akin to that in our own local neighbourhood of cosmic rays emitted by the sun. We propose that this is due to modulation at the source and is possibly due to processes in the shell of the originating supernova. We report that the entire spectrum, spanning cosmic rays of local solar origin and those eminating from galactic and extra-galactic sources can be explained using a new diagnostic — the gradient of the log-log plot. This diagnostic reveals the known Boltmann statistics in the solar-terrestrial neighbourhood but at the highest energies — presumably at the cosmic ray source, with clearly separated fractal scales in between. We interpret this as modulation at the source followed by Fermi acceleration facilitated by galactic and extra-galactic magnetic fields with a final modulation in the solar-terrestrial neighbourhood. We conclude that the gradient of multifractal curves appears to be an excellent detector of fractality.