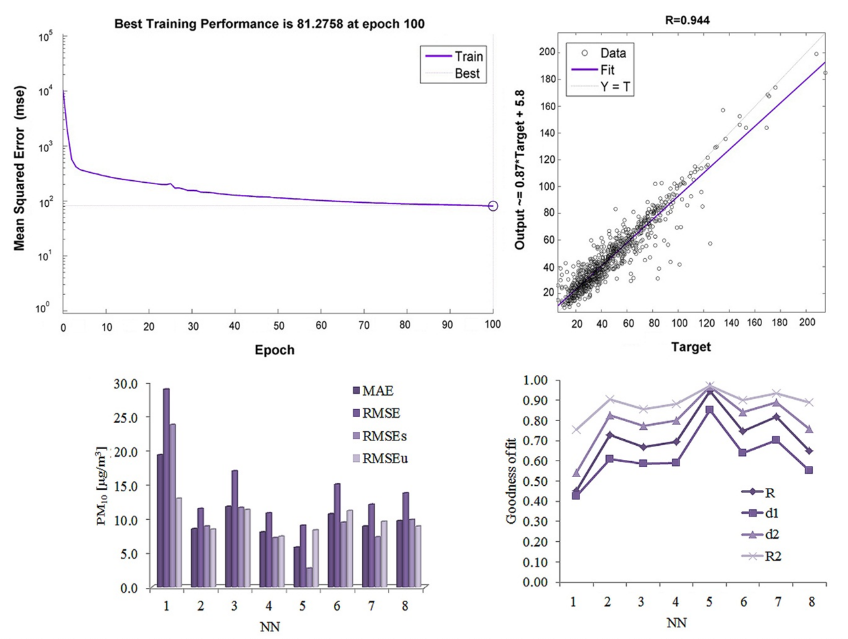 We report on the development and validation of a neural network (NN) model of PM10 concentrations in terms of photochemical measurements of NO, NO₂ and O₃ and temporal parameters that include the day of the week and the day of the year with its sinusoidal variation. A long-term record (~ 10 yr) from 2001-2012 (inclusive) assembled from measurements taken at 10 station nodes in the air quality monitoring network of the Greater Athens Area in Greece has been used. Eight synoptic categorisations of the circulation at 850 hPa were used to partition the data record, and to train individual NNs with Bayesian regularisation using 90% of available data for different atmospheric conditions. The time series of PM10 estimates was then reconstructed from the partitioned output. As a control, a NN without synoptic clustering was trained on the same data. The remaining 10% of the data was used for testing the simulation performance. NN models with synoptic clustering achieved an average root mean square error (RMSE) ~ 16 μg/m³ across the station nodes with an average index of agreement (IA) of 0.71 (somewhat better than the control network whose performance statistics were RMSE ~ 17 μg/m³ and IA = 0.61, respectively). For routine measurements below the EU Air Quality Directive limit value of 50 μg/m³, the average error is as low as RMSE ~ 11 μg/m³ across the station nodes. NN models were found to strongly outperform analogous MLR models over all station nodes.